There are thousands of source manuscripts for the New Testament, but there are thousands of minor variations in those ancient documents. The variations are there because, prior to the invention of the printing press about 600 years ago, every version had to be hand-copied, and in the copying came errors. No original writings have been preserved. We have to start with what are copies of copies of copies.

It is the work of textual critics to collect ancient manuscripts and to compare different versions and to decide on what they believe might be the divinely inspired text. How can they be sure? Who is to say that this is more accurate than that?

However, we looked beneath the plain text. Every letter of the Greek alphabet has a numeric value. This means that the Greek text of the New Testament may also be seen as a mathematical document. We believe that this study of the underlying design provides verification of the original text. 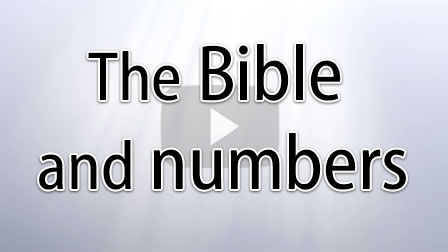 We are grateful to Dr Alan Bunning of the Center for New Testament Restoration for the work done to identify the original Greek text of the New Testament. There is no better place for anyone to start these studies than with an examination of the CNTR website. We recommend that serious students might click on the first link (CNTR Project Description) in the first paragraph of the Home page of the CNTR website. This will open a PDF file. Reading from pages 5 to 26 of this document will give you more insight than that held by many scholars.

Also helpful will be to take a look at this timeline of how our Bible came to be.

The Bible and numbers

Why the emphasis on forty?

The Bible doesn’t say. But it’s reasonable to make an assumption.

These are literal periods of time, but it seems that forty also symbolizes a period of testing. The hand of God is on view.

Now, every letter of the Hebrew alphabet has a numeric value, and the Bible phrase יד יהוה means “the hand of the LORD”, and יד יהוה has a total numeric value of forty. That seems to be by design.

Numbers in the Bible are symbolic.

Fifty is another number that stands out.

Seven gets a lot of emphasis in the Bible. It seems to be a special number to God.

And when we come to the Book of Revelation in the New Testament, sevens are on view everywhere.

Then there is the number eight.

Jewish males are circumcised on the eighth day after birth. Jesus was circumcised when He was eight days old.

We are touching on a few significant numbers in the Bible. But there are many numbers … seemingly random, but they aren’t ...

David had 37 mighty men. Jesus told the disciples where to fish and they pulled up 153 large fish. Does 153 represent something?

The Bible doesn’t waste words. The Bible speaks in practical, but also in deeply spiritual terms, and the Bible records that the catch was exactly 153 fish.

Two is an interesting number. In God’s view there are two groups … Jews and Gentiles. In Christ, the two become one … one new man. Israel divided into two … the tribes in the south (Judah) and the tribes to the north (Ephraim). Then the LORD told Ezekiel to act out a prophecy (see Ezek 37:15-23). A day was coming when Judah and Ephraim would become one, again.

There seems to be something symbolic in the number two.

There were twelve tribes of Israel. And twelve apostles in the New Testament.

But it gets a little complicated. And as it was for Israel, so a pattern repeats in the New Testament.

Out of the twelve tribes, Levi was set apart. Levi had no inheritance of land. The LORD was his inheritance. Twelve became eleven, by one count.

But Joseph married outside the land, and Joseph had two sons, and Joseph’s father, Jacob, brought the two sons, Ephraim and Manasseh, to the fore, to receive an inheritance. Twelve became thirteen, by a different count.

In the New Testament, Judas betrayed Jesus and was lost. Twelve became eleven.

Then the LORD chose Paul to be an apostle … someone chosen, after the others (Acts 9). Twelve became thirteen.

We’d hardly notice these things, except that there’s a symmetry between the Old and New Testaments. Is that symbolic?

There are 66 books in the Bible … the complete revelation of God.

Some people are superstitious about the number 13. But Jewish males become men … they have their Bar Mitzvah at age thirteen.

In the Old Testament, the four-letter word that represents the name of the LORD is יהוה in Hebrew. The numeric value of the word is 26. 26 is 2 x 13.

Is 13 bad? Where does the idea come from?

Every letter of the Greek alphabet has a numeric value. The expression … “… who is called the devil and Satan …” in the New Testament (Rev 12:9), in the Greek is: Ο ΚΑΛΟΥΜΕΝΟΣ ΔΙΑΒΟΛΟΣ ΚΑΙ Ο ΣΑΤΑΝΑΣ. It has a total numeric value of 2197, which can be expressed as 13 x 13 x 13.

But, in the same Greek New Testament it says that there was a notice on the cross, above Jesus’ head, that read: “Jesus the Nazarene”. In the Greek: ΙΗΣΟΥΣ Ο ΝΑΖΩΡΑΙΟΣ. hat name and title also has a total numeric value of 2197, which equals 13 x 13 x 13.

That could be confusing. But, the Bible says, “… Jesus, who knew no sin, was made to be sin on our behalf, that in Him we might become the righteousness of God” (see 2 Cor 5:21). Thirteen represents sin. But thirteen also represents atonement.

God loves us. So He reached out to rescue us. He bought us … through the blood of Jesus … if we accept that.

What is stated in the plain text of the Bible is more than sufficient to find salvation in Christ.

But, just out of sight in the Bible, is a watermark of God … a seal of His hand of design ... a mathematical structure in the Hebrew and in the Greek.

One day, it’s going to be plain for everyone to see.